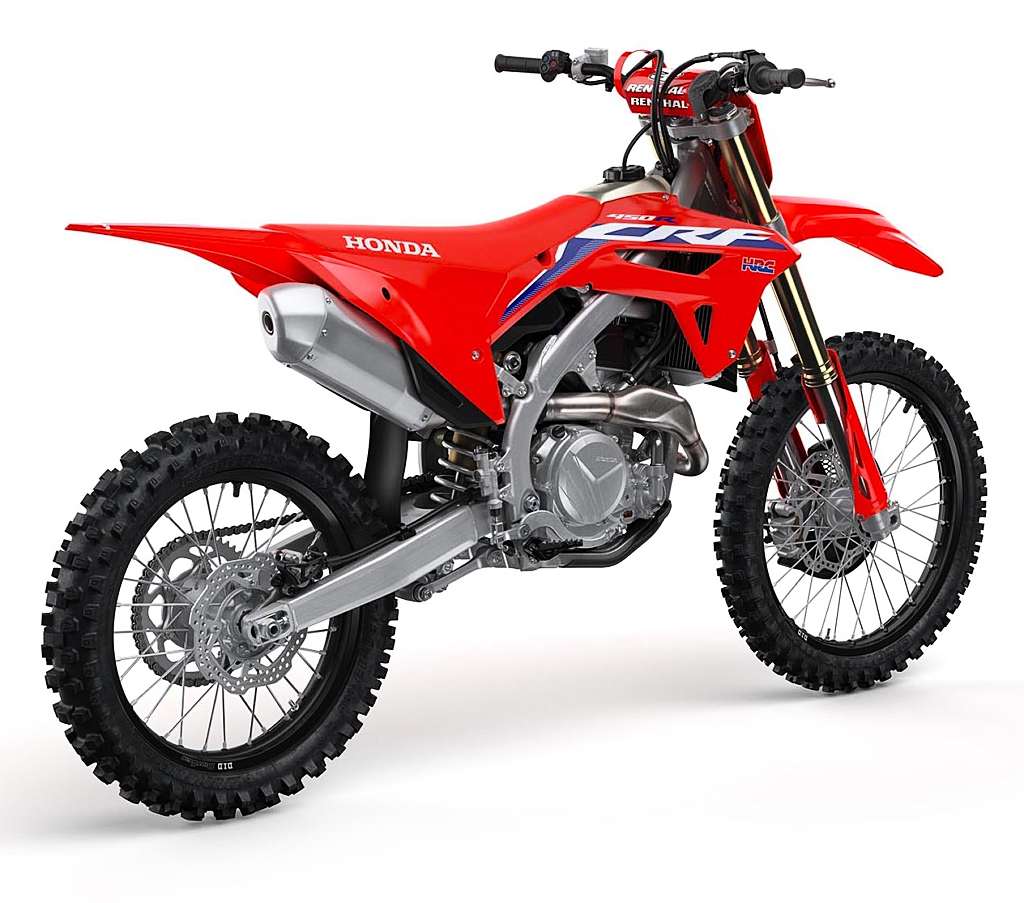 How many corners are there on your favourite motocross or Supercross track? As each one of those leads directly from the starting gate to the winner’s circle—at least when you’re riding a redesigned 2021 Honda CRF450R. New chassis. Major engine overhaul. New suspension. New bodywork. All with the goal of letting you rail through the corners with the most precision and power you’ve ever experienced. The engine’s power delivery starts off deep down for corner drive, and just keeps building until it’s at maximum roost. Forget about clutch fade, adjustment, or hand fatigue with the new hydraulic system. Lighter than ever, the CRF450R explode out of corners when it’s time to increase your lead.

449CC UNICAM ENGINE
Honda’s Unicam cylinder heads combine the best of single- and double-overhead-cam designs. The configuration contributes to a compact engine that saves weight over a comparable dual-overhead-camshaft motor and also permits a narrow-included valve angle. This flattens the combustion chamber to facilitate ignition flame propagation, allowing a high compression ratio. Since less space is taken up in the cylinder head, the camshaft sits lower in the head for a more compact engine and a lower centre of gravity.

REVISED DECOMPRESSION SYSTEM
You can’t see this unless you take the engine apart, but you’ll notice it on the track. Our engineers redesigned the auto decompression hardware, and also moved it from the right side of the cam to the left. The result is less stalling at extreme low RPM (think deep into a turn without downshifting) as well as better rideability.

NEW CYLINDER HEAD
The 2021 CRF450R gets a whole new cylinder head this year. Its biggest feature: an oval-shaped centralized exhaust port. Together with the new single-muffler exhaust, it boosts power from 5000 rpm up, and increases exhaust efficiency.

NEW FUEL INJECTOR BODY POSITION
We’ve changed the angle where the fuel-injector fits into the CRF450R’s intake tract. By steepening the angle from 30 to 60 degrees, the injector now sprays fuel all the way back to the throttle butterfly. The engine gets a cooler, denser fuel charge for more power and better torque. It’s little details like this that put the CRF450R up front.

DOWNDRAFT FUEL INJECTION
The CRF450R features a downdraft intake tract and FI body to help increase both power and fuel-metering precision. It’s part of the reason the CRF450R offers such explosive power and massive torque, especially out of the starting gate and in the critical first 100 feet of the race to the first turn.

DOUBLE-SPRAY INJECTOR SETTINGS
The CRF450R’s fuel-injection system sprays twice per intake cycle. That helps increase fuel atomization without adding the weight or complexity of a second injector. The better fuel atomization means more power in the midrange and on overrev - you’ll feel it the first time you race

CYLINDER HEAD LAYOUT
The CRF450R uses our latest finger-follower rocker design. The Unicam cylinder head remains one of the most efficient in the MX world, giving you the design and performance of a double-overhead-cam layout but the compactness of a single-overhead-cam design.

SKID PLATE
A factory skid plate is light and offers the engine and lower-frame protection that a racer demands.

LIGHTER, NARROWER FRAME
Great handling starts with a superior frame, and we’ve made some big changes to our 2021 CRF450R’s chassis. First, it’s lighter— nearly a kilogram lighter. By making the frame’s main spars narrower, we saved weight, but more important we made the chassis more responsive by reducing lateral rigidity 20 percent. The result is a bike that gets into, around, and out of corners faster.

NARROWER SWINGARM
Designed in conjunction with the new frame, by using narrower main members (just like the frame uses narrower main spars), we’ve matched the swingarm’s lateral rigidity to the rest of the chassis. What you get is a balanced, fully integrated approach to frame stiffness, letting you get around corners faster and with better feel.

LIGHTER SUBFRAME
We totally redesigned the rear subframe to make it nearly 350 grams lighter, and along the way simplified its construction too.

NEW BATTERY BOX
Three key features changed here: The battery box is lower, for an improved center of gravity. Second, it’s also easier to service. And third, it’s now water-tight, so there's nothing to worry about when racing in wet conditions.

FRONT SUSPENSION
We’ve increased the front suspension’s stroke by 5mm for 2021, for better handling and rider comfort. Also, we redesigned the axle holding fixtures at the bottom of each fork leg—that increases rigidity, and enhances steering precision and suspension performance.

NEW TRIPLE CLAMPS
The CRF450R is a perfectly matched package. With the frame and swingarm featuring a retuned lateral stiffness, and the fork legs featuring a new, stiffer axle fixture, we joined the two with new upper and lower triple clamps. Working in concert, they help improve and balance total rigidity, responsiveness and turning performance.

REAR SUSPENSION
The 2021 CRF450R’s new frame design gave us the opportunity to fit a new rear shock. We’ve optimized its shape to match the frame, and gave it new settings to work with the new chassis. The shocks valving resets faster for better response. In addition, we’ve fit a new steel spring that’s way lighter, cutting weight without cutting performance.

NEW EXHAUST PIPE
Along with the single-muffler exhaust, naturally we gave the 2021 CRF450R a new single-pipe header. We’ve completely changed the routing too, bringing it 74mm closer to the centre of the bike. It’s lighter, and helps improve weight distribution.

NEW SINGLE-MUFFLER EXHAUST
Changing the muffler’s construction to a pressed-alloy design let us reshape it too, for better rider ergonomics and lighter weight. How much lighter? More than 1 kilogram.

NEW HYDRAULIC CLUTCH
This is huge news for the 2021 CRF450R. Out with the old cable-actuated clutch, and in with the first hydraulically actuated clutch we’ve offered outside of our works bikes. Made by Nissin, it’s the same design as in our Grand Prix MX machines, and performs better than third-party conversions. You get a clutch-lever pull that’s ten percent lighter at its peak, even though it’s paired with a new, stronger 8-plate clutch. Plus, you’ll never have to worry about making a clutch-cable adjustment, even during the longest events.

NEW CLUTCH ASSEMBLY
While the new hydraulic clutch is getting all the attention, we’ve made even more improvement with the parts that do the work: the clutch assembly itself. Say good-bye to clutch fade—we’ve upped the number of clutch plates from seven to eight, to improve durability and hookup. That means 85 percent less slip at peak horsepower, and 27 percent more total torque transmission through the clutch pack. Even the spring is stronger, but thanks to the hydraulic actuation, clutch-lever pull is lighter than ever.

HRC LAUNCH CONTROL
We’re talking about a special ECU program here: push the button to select the mode, hold the throttle open, release the clutch, and the CRF450R will do the rest, launching you into the first turn with a big advantage. It turns your bike into a holeshot-seeking machine!

HONDA SELECTABLE TORQUE CONTROL (HSTC)
Notice that button on the handlebar by the clutch perch? The CRF450R gets our Honda Selectable Torque Control (HSTC). You can choose from one of three settings to perfectly dial your bike in depending on how much traction is available.

ENGINE MODE SELECT BUTTON
This simple handlebar-mounted button lets you dial in engine power delivery character with a push of your thumb. Choose between Standard, Smooth and Aggressive, depending on track conditions.

COMPACT FUEL PUMP
No detail is too small for our engineers—especially if they can make it smaller and lighter. That’s what they did to the 2021 CRF450R’s fuel pump. Why carry around any extra weight when you don’t have too? While they were at it, they reduced the number of attaching fasteners from six to four.

REAR BRAKE PADS
Brakes are for more than just stopping: they help you set up the bike in turns and jumps. Which is why we pay so much attention to detail like brake pads. They’re designed to last longer and give you more stopping power—a real win/win to help you win.

260MM FRONT BRAKE
The CRF450R’s large front-brake disc measures a whopping 260mm. You get great brake feel and a pattern that cuts down on weight. Front and rear brake-disc guards are part of the package too.

TITANIUM FUEL TANK
Grams and performance count, and the CRF450R uses a titanium fuel tank. Light and strong, it maintains the same capacity as our previous plastic unit, while freeing up more space and helping to centralize fuel mass.

NEW AIRBOX AND FILTER
Along with the new air filter, the airbox shape helps deliver more torque. You can access the airbox through the left number plate. And because the new filter has no rubber gasket where it interfaces with the intake boot, cleaning and servicing the filter is faster and less messy than ever.

ELECTRIC STARTER
Kickstarting? Maybe if you’re riding in the vintage class, but not here. By ditching the kickstarter entirely, our engineers can make the CRF450R lighter. Electric starters and lithium-ion batteries are so light now and so good that putting them on a bike like this is a win/win combination. And winning is what a CRF450R is all about.

NEW SWITCH ASSEMBLY
Check out the controls on the new 2021 CRF450R. We’ve made them lighter, and more intuitive. Controls used to be your bike’s shifter, clutch, and brakes. Now you have things like launch assist, selectable power modes, and more. We believe they should be easy to use, and we’ve just made them easier.

FRESH NEW STYLING
A bike the works as well as the 2021 CRF450R should look just as good, right? That’s why we freshened up the overall graphics package. Plus, our “in mold” graphics help keep your bike looking good. We think the only thing that could make it look better is a big ol’ First Place trophy sitting on the seat. We did our part—the trophy is up to you.

BLACK RIMS
They may not help you go faster, but the black DID DirtStar rims sure look good.

NEW SEAT
Sometimes you need to think out of the box—that’s what we did with the new CRF450R’s seat. We moved the attaching bolts from the rear to the front, and the tongue from the front to the rear. The result? When it’s time for service, removing and installing your new CRF450R’s seat is easier than ever.

FLAT SEAT/TANK JUNCTION
The CRF450R features a flat seat/tank junction, including a titanium fuel tank. The superior ergonomics make it easier to move forward and back on the bike, increasing your control.

NEW CABLE ROUTING
You may not notice it at first, but re-routing the CRF450R’s throttle cables and new hydraulic clutch line let our engineers shave over two kilograms off the bike. Light is always right!