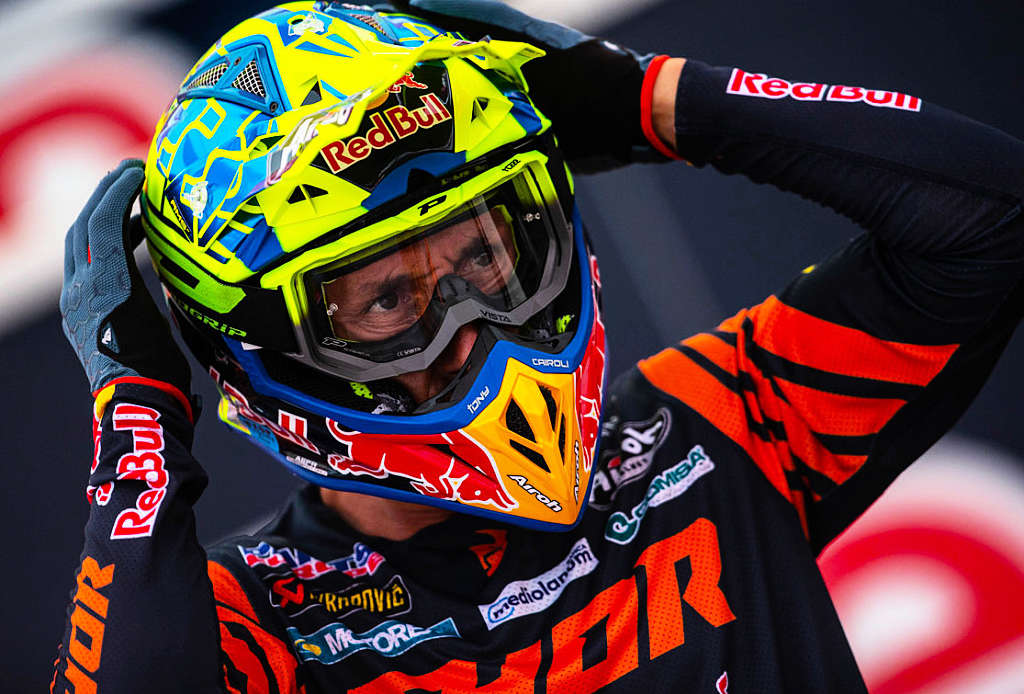 Red Bull KTM Factory rider Antonio Cairoli continues to show what an amazing racer he is, this time winning the opening moto of the MXGP of Riga today at the Kegums circuit. A clean start, keeping out of trouble and watching as the competition either crashed, or had bike problems. Yes, King Cairoli isn’t going away just yet.

“With this problem with the knee I need to start up front, because in the pack it is hard to rider your own lines and hard to use my knee. Jorge was first then I passed him, and I am happy with the overall. We try and make it to the podium this time, because last time wasn’t our type of race.”

Drama for the championship contenders as Tim Gajser crashed twice and DNFed the race, Jeffrey Herlings crashed in the first corner and came through to finish third, a brilliant effort and possibly a championship winning ride. Last Sunday’s winner Glen Coldenhoff finished in seventh place. Herlings now leads Gajser by 24 points in the championship.

Prado a front-end problem with a broken wheel and in the mechanics area and dropping placed fast as Cairoli took the lead. The King is back as Cairoli leads easily from Van Horebeek, Tonus, Bogers and Monticelli. Herlings up to 10th place. Gajser down in 17th. This is ridiculous, but none of the top ten were involved up front last Sunday. Coldenhoff ninth, and Herlings 10th. Jasikonis on a charge into 15th place.

An amazing battle as Herlings fighting with seven riders all looking to move into the top five. Desalle, Febvre, Paturel, Herlings and Coldenhoff all going for it. MXGP going wild again!! Herlings blasts past Coldenhoff and then Paturel, and Herlings into 8th place and chasing down the Kawasaki machines of Febvre and Desalle. Seewer following Herlings through the pack.

After six laps it was Cairoli, Van Horebeek, Tonus, Bogers, Monticelli, Desalle, Febvre, Herlings, Seewer and Paturel. Coldenhoff 11th, Gajser 14th, Jasikonis 17th. Monticelli just ahead of Desalle and Febvre and the two Kawasaki riders really putting a lot of pressure on the Italian as Herlings looms in the background. Gajser down again and back in 17th place.

Herlings into seventh place and Seewer into 8th as they relegate Monticelli to ninth. Cairoli a 4.5 second lead over Van Horebeek, and Coldenhoff also passed Monticelli. MXGP is just a frantic class, with battles all over the place. Gajser again crashed and is now back in 19th.

The lead by Cairoli after 10 laps was 6.5 seconds as the top ten was Cairoli, Van Horebeek, Tonus, Bogers, Febvre, Desalle, Herlings, Seewer, Coldenhoff and Monticelli. Herlings into fifth as he passed both Desalle and Bogers. Jasikonis really riding well in 10th place.

12 laps and nearly 10 second lead for Cairoli, and two other veterans Van Horebeek and Tonus second and third. Gajser out of the race and possibly an injury as he landed hard in his last crash. Tonus moved into second place, some 10 seconds down on Cairoli, with Van Horebeek third, Febvre, fourth, Herlings fifth, then came Seewer, Desalle, Coldenhoff, Jasikonis, and Bogers 10th.

Changed up front as Febvre, Herlings and Seewer all passed Van Horebeek. Seewer still stuck on the back wheel of Herlings, as it had been all race long. Cairoli cruising up front as Tonus went down in a slow corner and Febvre and Herlings moved into second and third positions. Tonus back in ninth place. King Cairoli wins it from Febvre and Herlings. What a stunning moto.