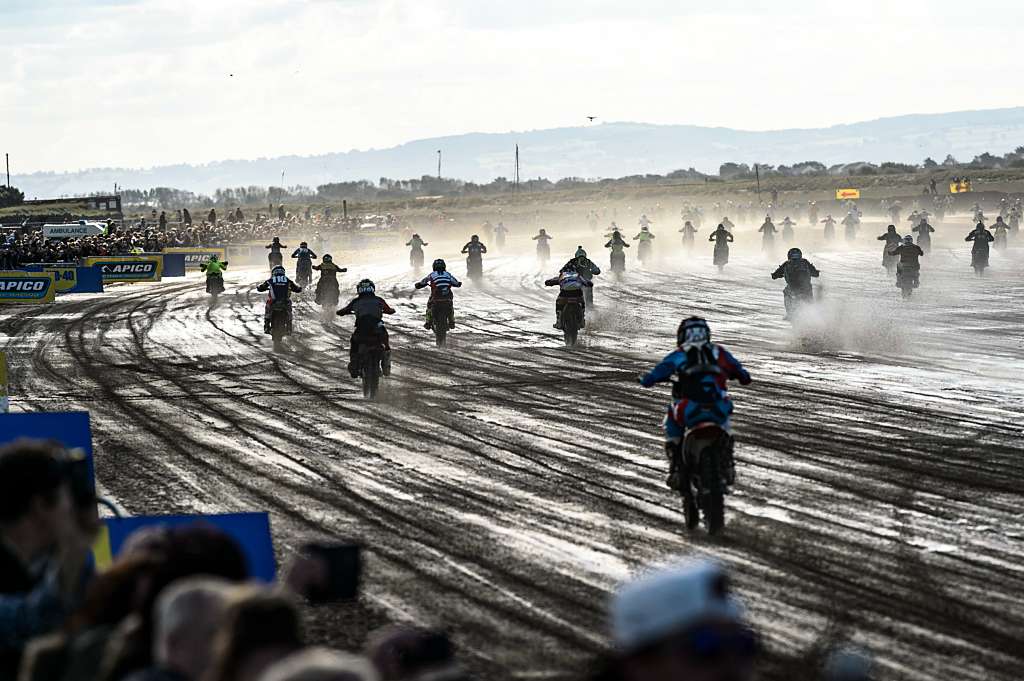 The Weston Beach race is very much an event that you should attend at least once in your life, or if possible, make it a yearly occurrence. Just imagine, 100,000 spectators, thousands of crazy motorcycle rides, and a handful of mega stars doing what they do best.

For promoter Gareth Hockey, this event is his baby and he works hard on making it a special occasion for everyone involved. While it might be American crazy-man Ronnie Mac who steals the show in 2019, don’t expect the entertainment to end there. From Friday morning until late on Sunday night this coming weekend will awake the sleepy city of Weston Super Mare and we decided to give Hockey a call and ask him what to expect.

MXlarge: Tell me, everyone knows Weston beach race and it has been going for decades. I noticed you do have some high level endure riders coming and also Ronnie Mac, but do you really need these guys, because I imagine it is an event that stands on its own?

Hockey: The Weston doesn’t need to superstars, because it is a bucket list thing and it would be nice to have Jeffrey Herlings, but it doesn’t matter. Some people like to line up against somebody like Jeffrey, but a lot of riders are pricing themselves out. You know, we have years that we don’t have any leading riders and the crowd figures are he same. Sure, people would like to see the superstars, but they probably enjoy the less able riders struggling around the circuit more than seeing the superstars. The sport is getting more like that. The riders want to ride a circuit that is really tough, and everything is becoming extreme events, like the World Super series in Enduro. We have to try and have that balance, because we also know a lot of the riders competing are club riders and last year, we made the circuit a little too brutal.

MXLarge: But you still bring in some of the leading World Enduro riders for the event?

Hockey: You know, for me, when I rode, I wanted to line up against the top guys. Nobody got the chance to ride with a Dave Thorpe, so if I can get Billy Bolt, or people like that, people do like their name in the same program as some of the stars. It was like the year we brought Travis Pastrana and he did a ¼ of a lap and everyone beat Travis Pastrana. He broke his wrist and his mother said I ruined his career.

MXlarge: He hasn’t done too bad since then has he. Maybe he should give you a percentage of his earnings? What else can people look forward to this coming weekend?

Hockey: The event if live from Friday morning, because we have all the trade here, all the manufacturers are coming, so all the new bikes are on show. RaceFX, Apico, FOX are there and also Dougie Lampkin doing a trials display, Danny Butler doing a push bike display, Paul Hannan on the quad, he back flips a quad. At the minute we are dealing with something with Ronnie Mac taking on Dougie Lampkin and Carl Foggerty, a sprint race, but that hasn’t been finalized. We have a full-on pub on the beach.

MXlarge: It sounds fantastic. I know I had spoken to Roger Harvey (former winner of the event) about it and he said it was a great event and he used to go every year.

Hockey: That is one of the great things about Weston, you get the former riders like Roger Harvey walking about, or Dave Thorpe, it has just a really cool feel about it. A lot of old faces.

MXLarge: I can imagine the whole area gets into it?

Hockey: Yes, we have a very supportive council and there is something like 5700 bed available and it is sold out. We have cold out the camping a month ago and the local golf club have come onboard and they have camping now there. It is great for the economy and everyone goes out at night, drinking and eating and spending money.

MXlarge: It is crazy when you talk about events like this, it is miles bigger than a GP, or even the Nations.

Hockey: I think that is because it is totally different. It is like audience is a motorcyclist, but we get so many people from the outside World, and we also have a lot of nice places in the area, so it is a nice area to visit. It is just a group of guys having fun.

MXlarge: What are you most looking forward to this year?

Hockey: Ronnie Mac. I think Ronnie will be interesting. When you talk about celebrities, we try and bring somebody with a broader appeal. For some young kid, if he can see this wild American, that’s all part of the fun isn’t it.

MXlarge: What a role model, hahaha!!

Hockey: People love him don’t they. We are going to have a pit stop for him, where he will stop, talking to the crowd, do some autographs, drinks some beers and just have fun. People just want to see him, and we sold out our VIP tent because Ronnie is going in there for 30 minutes.

MXLarge: He is a pretty good rider; he might do okay for the first few laps?

Hockey: I think he will, he is happy to play it how we want to play it. The nice thing about Americans they get paid and they do a job. Our event is very kid orientated and we don’t want him swearing or doing anything stupid and he won’t, and he can’t wait.