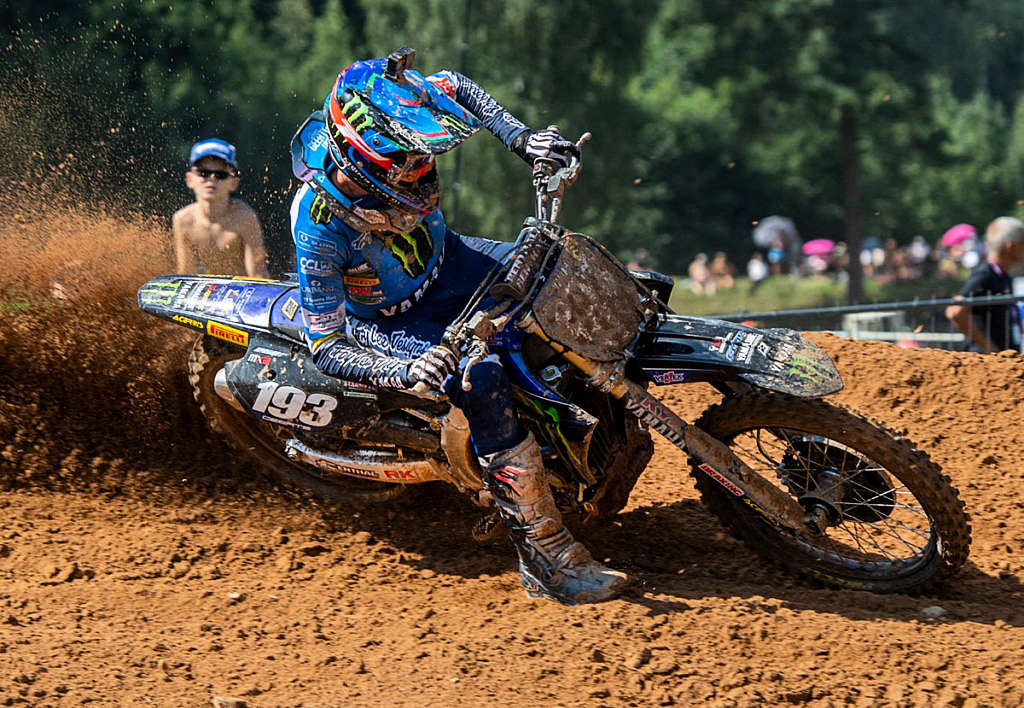 Monster Energy Yamaha rider Jago Geerts has won the opening MX2 moto at the MXGP of Riga today. Unlike last Sunday the Belgian rider showed smarts as he followed early leader Tom Vialle, before pouncing and walking away from the Frenchman, who slowly lost places to finish fourth.

“It was a really good race for me. I had a good start and then Tom passed me on the second corner and then I made a mistake and he passed me back. I was able to repass him and win the race. I am really looking forward to the second one.”

Vialle quickly into the lead as Watson retired from the race with what seemed a machine problem. Geerts this time seemingly willing to follow Vialle, rather than push too hard and make another mistake.

Geerts made a slight effort in a corner and lost a little ground on Vialle and Van De Moosdijk keeping the two leaders in his sights. Boisrame also pushing hard with Olsen behind him. Van de Moosdijk all over Geerts for second place. Beaton on fire in 15th place and taking a lot of passes in the first two laps. Aussies chasing as Crawford is 11th, Malkiewicz 12th and Beaton 14th.

After three laps it was Vialle, Geerts, Van de Moosdijk, Boisrame, Olsen, Laengenfelder, Renaux, Haarup, Genot and Rubini 10th. Geerts into the lead on lap four and makes a small break from the Frenchman. Beaton into 12th place and his fellow Aussies on each side as Crawford was 11th and Malkiewicz in 13th.

Seven laps and Geerts lead was nearly four seconds over Vialle, with Van de Moosdijk in third, followed by Boisrame, Olsen, Laengenfelder, Renaux, Haarup, Genot, and Rubini 10th. Another two laps and the lead was nearly seven seconds and Beaton into the top ten as he continued to chase Crawford.

An exciting time as Geerts, Vialle and Van de Moosdijk all together on the track, as the Dutchman moved into second place and Boisrame also right on Vialle. Van de Moosdijk trying to put pressure on Geerts for the lead and Boisrame passed Vialle for third place. The F&H Kawasaki boys looking to take some serious points today.