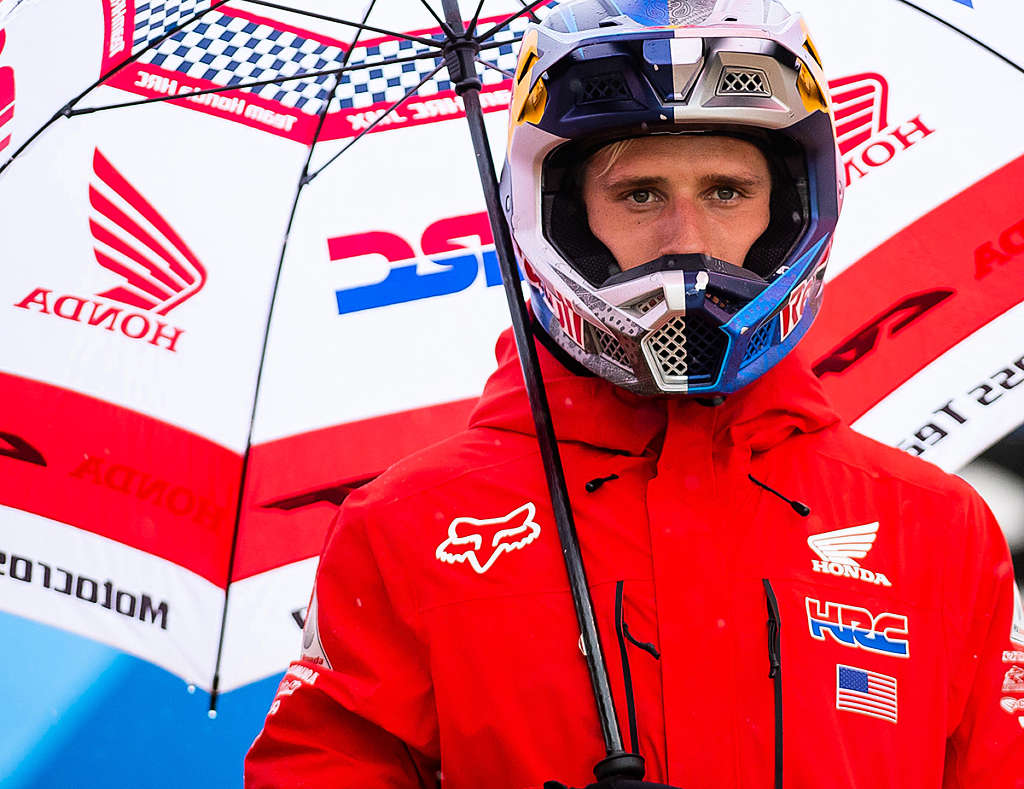 Life isn’t great for HRC rider Ken Roczen when it comes to racing, although the good news he will be a father in September. Lets first talk supercross where Ken Roczen still has an outside chance to be crowned AMA supercross champion of 2020, but his chances are running out quickly as he struggled to a 10th place finish yesterday.

Roczen was held up in the first turn and completed lap one in fifth before quickly advancing another spot. As had happened at the previous round, however, the German wasn’t able to maintain his momentum, and he was only able to manage 10th.

In the first heat race, Roczen led early but was slowed by a flat rear tire and had to settle for second. Brayton was third, with Stewart sixth. In heat two, Smartop/Bullfrog Spas/MotoConcepts racer Justin Hill was the top Red Rider, finishing eighth, one spot ahead of his teammate Vince Friese.

Now the good news, on Thursday, Roczen’s wife Courtney revealed via Instagram that the couple is expecting a baby boy in September. The Roczens have kept the news quiet, but with Courtney’s baby bump becoming increasingly apparent, they decided to make the announcement.

Ken Roczen: “These past two races obviously haven’t been the results that we needed to be in the fight. That doesn’t mean that we aren’t still trying. Sometimes you’re dealt a hand of cards that are completely out of your control, but we’re trying to make the smartest and quickest decisions to get through some of the health issues that keep coming up. My heat went well and I led a handful of laps until I got a flat. The boulders started popping up and I think I know right where the rock got me in the whoops. With the weather changing, we tried to make a tire decision that would give me the best chances of not having that same thing happen in the main, but that obviously didn’t work well. I’m not the type of guy that likes to roll around or is satisfied with a fifth- or 10th-place finish, but sometimes if that’s the best you can do for the night, you just have to except it for what it is. I can’t thank my team enough for being patient with me and for never wavering in their support. I know the sacrifices they’re making to be up here and all of the work they’re putting in to give me the best equipment and support, and I want to do better for them. I couldn’t be more grateful for them and I hope we can turn this around and be in a better position to put up a fight on Wednesday.”