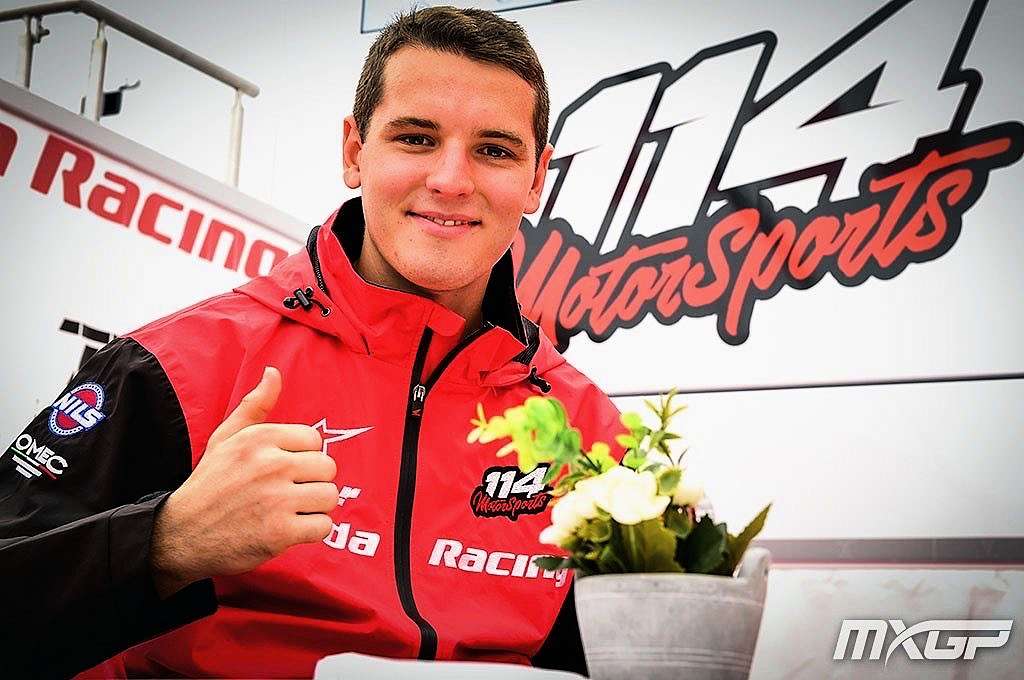 New blood in the MXGP championship is always a good thing and young Australian Mitchell Evans move to the HRC factory team in 2020 will raise a few eyebrows, some questioning the move, others confident this talented kid from down under can cope against the best in the World.

Having debuted in the Grand Prix series in 2018, Evans showed his potential at the opening round of the MX2 championship in Argentina, finishing with a podium place, and introducing himself to the World of motocross.

Injuries saw Evans struggle for much of 2019, but it was clear to everyone the Aussie kid had what it took to really progress in Europe. Another podium mid-season in Portugal and it was clear, despite his niggling injuries, Evans was capable of a lot more.

After some early talks with HRC, to maybe race their MX2 effort in 2020, it was then decided that the rather tall and strongly build rider would actually be more suited to the MXGP class, and a contract was signed.

Similar to Australian legend Jeff Leisk, who rode for the HRC team in the 1980s, Evans was getting the chance of a lifetime, and he knows it better than anyone. 30 years ago, Leisk was able to finish second in the World in 1989, but having already raced in America, and with a lot more experience Leisk’s results were expected. While Evans isn’t anticipating he can duplicate the results of his fellow Aussie just yet, however, the eventual goal is to be running up front in the toughest motocross series in the World.

As we moved into the off-season and Evans starts to prepare for his debut in the MXGP class in 2020, we caught up with him and asked him about the deal and what he expects from next year.

MXlarge: Tell me about Japan, your first race on the HRC machine?

Evans: Yes, it was pretty good. I only had two days on the bike before the race, but it was pretty cool. The track had really good dirt and from the rain they had it was really nice for the conditions. It made it rough and technical and a lot of deep ruts. It was fun to meet a lot of people and see a lot of things from HRC and Honda. I had always wanted to go to Japan, so that was my first time and I really enjoyed it and go back some time soon.

MXlarge: Was it a full factory bike?

Evans: Yes, it was the team from the Grand Prix’s. So, they sent it in a flight case like for the overseas races.

MXlarge: How did you like the bike. Had you ridden it before those two days before the race?

Evans: I did some training on the 450 towards the end of this season, but not the factory one, so when I got on this one, it had a lot more power than the one I rode. It took me a bit to get used to, because it was pretty aggressive and not as talky as I was used to racing a 450 in Australia but we did the two days testing and got it sorted pretty fast and by the time the race came around, I felt comfortable on the bike already.

MXlarge: So, you are in Italy for the announcement, but are you also doing some testing while you are here?

Evans: Just the show really and getting everything set up like my apartment and everything for the season ahead.

MXlarge: You started 2019 really well with a podium in Argentina, and then it went a bit sideways with a lot of injuries and disappointing results. I mean I understand you were told rather early you might have a factory ride for 2020, but how did that go throughout the season as your results suffered?

Evans: There was talk about it, early on, and then it went away and then maybe I would stay on the 250 and then maybe the 450. I didn’t focus on it really, because I wanted to still get good results, because I had spelt a lot of money to get myself over here, and I needed to earn money to get by really. There were some things that didn’t go in our favour. It was a learning year for me, learning the tracks and whatever. I think it came to me being a big guy on a 250 and taking too many risks that I shouldn’t have been doing. It just bit me in the end. I had to be smarter, that would have been better.

MXlarge: After watching the Monster Energy Cup and seeing Cianciarulo on the 450 and how good he looked, and he is a big guy, I mentioned to Rasmus Jorgensen about Thomas Olsen being way better for a 450 than on the 250, and he agreed. You are a similar type of situation, a big guy, and you will probably be a lot better on the 450 than the 250. Would you agree?

Evans: Yes, well, I raced the 450 in Australia, and I wanted to go to 450, because I am a bigger kid and I like to ride a bike using the talk of the engine and not so much revving it and high in RPM’s like on the 250, and that is why I think the 450 suits me better. Mainly because I am big, every year I try and ride a 250 I have to lose weight and get sick, and then eventually put the weight back on. So, it is just a lot healthier for me and I enjoy life more because I don’t get tired or run down and sick. I just don’t have the energy watching my weight all the time. I am much happier on the 450.

MXlarge: The vibe in that HRC team is a really good one, obviously made better because Tim won the championships. It is a very happy and a close-knit group, from Tim and his girlfriend, to the team manager Marcus, to Roger (Harvey), even David (Bulmer) the media guy, it is a really friendly group of people. You must be looking forward to working with them?

Evans: Yes, it does, like you said, it is like a family atmosphere and they all get on and that comes from the Italian culture maybe. I got to spend time with them this year, because my truck was always parked next to them, so I know everyone in the team. It is all happy days with Tim winning the championship. Once I knew I was riding for them, it got me really excited, because I have already gelled with everyone, so it wasn’t a big shock coming in and starting with new faces and people I didn’t know.

MXLarge: Obviously it is important to get a really good start to the season, and those first three rounds look like good tracks for you, starting in Matterley Basin, then Valkenswaard and the third round Argentina, where you got a podium last year. Do you look at the calendar at all and think it is a good start for you?

Evans: I did look at the calendar, but to be honest, I am not worried about which tracks they are, or which ones suit me. I learnt a lot from last year, so I am looking at this year a lot differently. That will pay off a lot more in the long run than looking at which tracks suit me. I need to concentrate on my program so I don’t train too much or not enough, so I can head to round one and be ready to battle the big boys.

MXlarge: The paddock will be full of Australian riders, with Jed in the Husky team, Wilson Todd coming over and the two Aussies racing for the 114 Honda team, and of course yourself. Do you know all those guys and does that help a little to have more Aussies around the paddock?

Evans: Yes, it will be really cool, and I pretty much know all of them. I talk to Jed all the time and Wilson, so it will be pretty cool to go around the paddock listening to the Australian accent, because you miss it sometimes and have a normal conversation at normal speed, without having to repeat yourself sometimes. It will be good, because we all get along well, and its going to be good and a lot of fun and make you feel like you are home a little.

MXlarge: What are your plans now until the pre-season?

Evans: I will stay in Italy until the end of December, then I will go home for Christmas and New Years and spend that with family and then come back early January, do the three Italian championship rounds, before Matterley Basin. Pretty much the same schedule I did this year.

MXlarge: Did you like the schedule, some of those Italian tracks seem a little different and challenging at that time of the year and it is pretty cold.

Evans: It was new to me. The weather in Sardinia was okay and I enjoyed the track there, but once we went to Mantova and Ottobiano, I really struggled with the cold weather there. Ottobiano we didn’t even know if we would race there because of the snow. I have to admit, I am not that keen on racing in that cold weather again, but I just need to man up and try and learn as fast as I can. Everyone else here has grown up in that weather and it isn’t too bad for them, but it was a big shock for me. That is a long way off, so I am not stressing about it yet.

Evans: I think if we put in a good offseason and get the bike dialled in like we want, I think we can be competitive and that class is really tough and it will be hard to be really consistent, but I think if I can get consistent top ten, then I will definitely be happy. I would like a podium before the year is out. Every year I have underestimated myself a little bit and then gone to round one and podiumed and surprised myself, so this time around I am not going to underestimate myself and I am looking forward to the challenge, that is for sure.