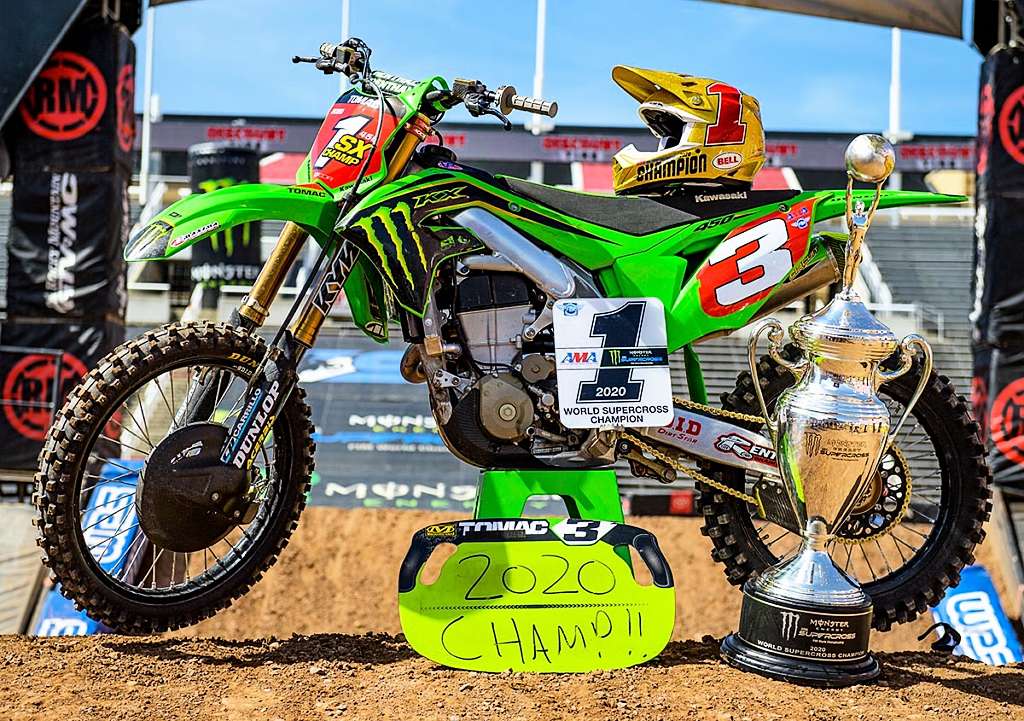 It was a big day for three men in Salt Lake City yesterday morning. Eli Tomac got his first AMA supercross championship to add to his four AMA motocross championships and two youngsters Dylan Ferrandis and Chase Sexton won their second consecutive West and East Coast 250 championships. A gallery below and some comments from their teams.

Tomac kicked off the finale in a familiar way by topping the charts in qualifying in the 450SX class with a fastest lap of 49.438. After tying with the competition for first place in the final qualifying session, the AMA had to go to ten-thousandths of a second to determine who was fastest, which landed Tomac his fifth pole position of the season.

Keeping the momentum rolling into 450SX Heat 2, Tomac got off to a great start in fifth and remained there for more than half of the race. As the time ran down, Tomac began to make his move on arguably the most technical track raced in Utah and passed two other riders to finish third.

As the gate dropped on the final 450SX Main Event of the 2020 season, Tomac got tangled with riders in Turn 1 but was able to avoid any kind of disaster, starting in 10th. Maintaining his cool, calm and collected demeanor, Tomac began to put in laps and gradually pick off riders, making his way to sixth by Lap 9. Tomac made one last pass a few laps later to cross the finish line in fifth, earning Kawasaki’s 11th 450SX championship as well as the 2020 Manufacturers Cup award.

The day was a victory for all as Monster Energy Supercross is the first professional sport to complete their series after being suspended due to the global pandemic. Tomac has expressed many times that the silver lining of the time off was being able to see the birth of his daughter and he is now the first rider in history to win the title as a father, making it even more special to earn on Father’s Day.Dylan Ferrandis overcame challenges to finish fourth at the East-West Showdown and secure the 250SX West Championship for the second year running at Sunday’s Monster Energy AMA Supercross season finale at Rice-Eccles Stadium in Salt Lake City. It was a roller coaster day for the Monster Energy Star Yamaha Racing team as whole with Shane McElrath finishing second, but coming short of the 250SX East title. Justin Cooper crossed the line seventh and Colt Nichols was unable to start due to a crash in his Heat race that sidelined him for the Main Event.

It was fireworks from the start even before the East-West Showdown began. McElrath found himself into the tough blocks and over the bars after an incident on the practice start in the 250SX East qualifying. He ultimately ended the session in third behind his teammate Nichols in second. In the Western Regional class, Ferrandis not only topped his class but set the fastest 250SX time overall, with Cooper qualifying fourth.

Things really heated up in the regional Heat races. The East started the night and it was Nichols getting the holeshot with his teammate McElrath behind him. With the title on the line, the North Carolinian quickly made his move to the front. In the final moments of the race, the leader in the Eastern Regional class, Chase Sexton, made his move to take second and landed on Nichols coming out of the triple into the right hander. They both went down and the Monster Energy Star Yamaha Racing rider rejoined the race to take the last transfer spot in ninth, but was unable to start the Main with a hand injury. The Oklahoman plans to get further evaluation when they get home.

In the 250SX West Heat, Cooper took the lead early and held it all the way to the checkered flag. Behind him, Ferrandis found himself on the ground after the start in turn two. He rejoined the race but had his work cut out for him in 18th. The defending champ pushed forward but was just short of the transfer spot in 10th. Ferrandis has never had to race an LCQ in supercross before, but with the title on the line the Frenchman took the all-important win.

The drama continued in the Showdown Main Event. McElrath bagged the holeshot and started to build a gap on the competition while his title rival was farther back in eighth. Ferrandis got a decent start considering his less than ideal gate pick, but unfortunately for Cooper a rider cross-jumped him early in the race, putting him onto the ground. Then Austin Forkner went down hard, which brought out the red flag and called for a complete restart, erasing McElrath’s four-second lead. It turned out to be a repeat of Round 7 for the North Carolinian and he was unable to get another holeshot and rebuild his lead after the restart. Sitting in second, he made an attempt to pass the leader but was blocked and his rival was able to move past them both. McElrath quickly retook second and the championship contenders exchanged positions a few laps later, but McElrath ultimately had to settle for the runner-up spot and second in the 250SX East standings.

As for Ferrandis, with Forkner unable to restart and Cooper behind him, he just had to finish the race. There were some hectic moments, but the champ got the job done with a fourth-place finish to score his second title before he moves on to the 450SX class next year. His teammate Cooper recovered from that first lap crash before the restart and managed a seventh place finish to end the year second in the 250SX West Standings.

Having used a consistent approach to wrap up last year’s 250SX championship with a single victory, Sexton was much more assertive this season. He opened the nine-race series with a solid second-place result in Tampa in February, then reeled off a pair of wins in Arlington and Atlanta, followed by another runner-up finish at Daytona. At that point, the series took an unscheduled 12-week hiatus, prompted by the COVID-19 pandemic, but in its return for a five-race stretch in Salt Lake City, the Illinois native notched three more wins, another second place and a fourth (his only non-podium finish). His victory at the finale was his third in a row.

Sexton signed with Factory Connection in 2015, first racing for their Amsoil Honda amateur program and then for their GEICO Honda squad after turning pro in 2017. Sunday’s win came at his final race as a 250 rider, as the 20-year-old will now transition to Team Honda HRC to campaign a factory CRF450R alongside his friend Ken Roczen in the AMA Pro Motocross series. 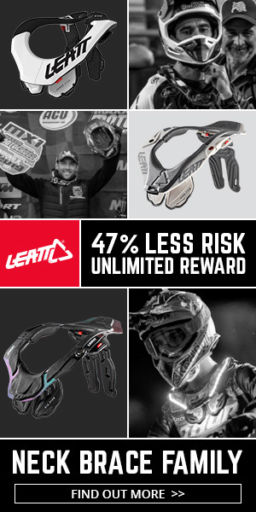